A Biblical/Philosophical Study of Christianity and the Culture It Produces 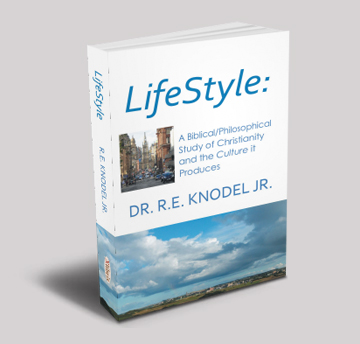 David Brooks of the New York Times has identified culture study and shaping as the dominant focus of the 21st Century.  Yet at this junction, confusion prevails. One set of culturologists have identified over 160 definitions of the idea!

With the publication of LifeStyle, culturologist/philosopher R. E. Knodel, Jr. makes a major contribution to this debate involving politicians, philosophers, foreign policy experts, and theologians.  Drawing on philosophical analysis and studies of Christendom, Knodel defends the notion that God himself established this concept in creation; and that refusal to recognize this genius cuts us off from the culture of freedom, productivity and prosperity that people desire.

Dr. Knodel uses the stencil of the creation in the Book of Genesis and finds an embedded philosophical principle that keys the cultural enterprise.  It reveals a divine mandate for seeing unity in the often hostile dichotomy between the sacred and the secular. This both challenges and motivates as one sees the turmoil of both church and culture at the onset of the 21st century. Knodel begins with his definition and then argues the sense of it. Succeeding chapters analyze Christendom’s past cultural failures, show how Christ is a key to world development and survey competing definitions—even that of Islam.
A well-crafted, cerebral literary masterpiece, LifeStyleis packed with wisdom and inspiration—a unique work that propels readers to bring their gifts to every future human endeavor, for the glory of the God. It is a must read for those who are serious about life and the cultural enterprise.